It’s the near future and the world has descended into chaos. On the surface, everything looks the same – yet the unthinkable has happened. The dead have risen …

Everyone is haunted by a dead relative, friend, spouse or stranger and these spirits are unshakeable, silent and watching. No one is safe. Governments the world over fail to deal with the epidemic. Crime is rife and murders commonplace. But who is responsible: the ghosts or the people?

Finding out is where Detective Oscar Mariani comes in, although it’s nearly impossible to run a department when you can’t even see half the suspects. His strike rate is embarrassingly low.

Then he stumbles onto a case that cuts through his apathy. A ritualistic, brutal serial killer is at work murdering young women, and the evidence implicates those in high places. If Mariani can solve the case, and keep himself alive, he may be able to exorcise his own ghostly shadow, a dead young man who just might have a message Mariani needs to hear.

A gripping mix of police procedural and supernatural thriller, The Broken Ones is a compelling, knuckle-whitening ride.

Zombie Type:
All types represented. Hungry, undead, and pissed off!

Zombie fiction from many sub-genres are represented here: zombie apocalypse, zombie survival, zombies in human society, zombie hunters, and more. And the one thread interlocking these disparate groups–ZOMBIE MAYHEM! This action packed anthology takes a syringe full of contaminated adrenaline-laced undead and slams 1000 CCs directly into your chest cavity.

Fast paced, yet thoughtful, The Zombie Feed: Volume I will sate your appetite… at least temporarily.

* Cold Comfort by Nathaniel Tapley
* This Final December Day by Lee Thompson
* What’s Next? by Elaine Blose
* Rabid Raccoons by Kristin Dearborn
* The Twenty-Three Second Anomaly by Ray Wallace
* Not Dead by BJ Burrow
* Tomorrow’s Precious Lambs by Monica Valentinelli
* The Fare by Lucien Soulban
* A Shepherd of the Valley by Maggie Slater
* Broken Bough by Daniel I. Russell
* The Last Generation by Joe Nazare
* Goddamn Electric by K. Allen Wood
* Hipsters in Love by Danger Slater
* The Sickness unto Death by Brandon Alspaugh
* Lifeboat by Simon McCaffrey
* Zombies on the Moon by Andrew Clark Porter
* Bitten by Eugene Johnson

Our world is not the only one…
From apartments haunted by ghosts both internal and external, and horror museums masquerading as doorways, to towns where vehicular manslaughter is a way of life, and highways are a preying ground for monsters, GHOSTS IN A DESERT WORLD is a collection of 13 macabre tales designed to chill you the core.
Interweaving dark, and oftentimes socially relevant themes, with the spiritual and philosophical, GHOSTS IN A DESERT WORLD will make you think, even while leaving you afraid to turn the lights out.

“In particular I liked the author’s handling of the blood work. I keep saying it and no one is listening: good horror writers have an inborn ability to limit their own prose without rubbing a reader’s nose in the visceral. Matthew Tait, on the evidence in this collection, is a good horror writer” – Scary Minds.

“Matthew Tait’s collection of short stories kidnaps the reader and abandons him in a disturbing world of lunacy and paranoia. Tait’s horror is at the same time in-your-face and darkly atmospheric. There are some recurring themes that give this collection a sense of haunting continuity. Stand-out tales like “The Devil’s Plaything” and “Dark Crib” introduce the reader to the town of Cyclone Cove, where it’s not always easy to tell just who the maniacs really are while “Car Crash Weather” and “Terrica” illustrate the terror of the automobile. Every horror fan should join Tait on his grim road-trip through a desert world” – Cameron Trost, author of Letterbox. 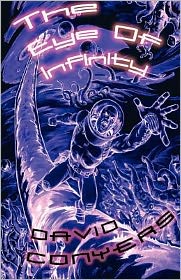 At a remote radio telescope facility in New Mexico, an astrophysicist commits suicide after contracting a hideous mutative plague caused by something he saw… and he won’t be the last. Major Harrison Peel has witnessed his share of cosmic mutations before, but now, he faces a threat worse than death, and a powerful enemy that hides behind a human face.
When a top secret NASA program refuses to heed his warnings, Peel is catapulted into a nightmarish government conspiracy that takes him from Ft. Meade’s Puzzle Palace to the launchpads of Cape Canaveral; from the desolate Atacama Desert of Chile, to the very heart of the universe itself, all in a desperate bid to shut… The Eye Of Infinity.
The first Harrison Peel tale in three years, *The Eye Of Infinity* features a Mike Dubisch cover and a dozen illustrations by Nick Gucker. *The Eye Of Infinity* continues the saga of Harrison Peel, a veteran of covert wars against alien invaders, and fuses Mythos horror, quantum physics and interstellar cloak and dagger action into an instant pulp classic.

David Conyers can make reality terrifying and quantum physics understandable and interesting. He is, undoubtedly, one of the best Mythos authors since HP Lovecraft invited us all in to play. – C.J. Henderson

The Eye of Infinity is the epitome of modern Cthulhu Mythos fiction: tough, probing characters facing unfathomable beings and making impossible decisions. It’s round two in the biggest fight we’ll ever face – humanity vs. cosmic horror – and this time, no one is going to escape unscathed. David Conyers is the reigning king of the Cthulhu Mythos Down Under. With Conyers at the helm, you won’t be disappointed by your journey.- Shane Jiraiya Cummings, Horrorscope

by B. Michael Radburn
Pantera Press

OzWriting Plus
An online resource for writers of all genres and fields, covering markets, agents, contracts, publishing, royalty payments, promotion, copyright, professional responsibilities and links to other resources.

http://ozwritingplus.blogspot.com/
Scary Minds
ScaryMinds has a strong committment to the discussion and promotion of local horror literature. We will regularly review novels, short story collections, etc, and interview the writers working in horror in this region.

From the Pit
From the Pit brings you the latest Australian horror news in books, comics and film.