We have a great update for you this month with a plethora of publications plus a Sinister load of Sinister Happenings.  Enjoy!  On a side note… the chill of death has descended on Melbourne.  It could be winter on its way but that’s just a boring explanation!

Follow this and start receiving monthly updates of publications.

The challenge has been set: write an original horror tale based around George Romero-style zombies. No ‘28 Days Later/rage’ sprinting zombies and no ‘Haitian voodoo’ style zombies.  We want ‘dead, and risen from the grave’ style zombies. No runners.  Think Romero’s classic Dead films. Slow moving, moaning, rotten corpses, chowing down on the living.

As the organisers at Melbourne Zombie Convention 2013 put it:  “MelbZomCon will celebrate the conception of the original urban zombie, using the first Romero cult film, Night of the Living Dead as an aesthetic template and thematic landscape. Come along and experience the unsettling terror of the original shambolic reanimated corpse, before the new millennium required it to sprint, mutate and infect to keep pace with the frenetic attention-deficit age. Fog-strewn graveyards; rotting coffins; crumbling tombstones; reignite your appreciation of Romero’s inspired vision of the relentless, classical urban zombie.”

In other words, keep it simple, folks.

Join us at Continuum 9

Come and join other AHWA members at continuum 9: contraindicators. Check out this annual Melbourne speculative fiction and pop culture convention celebrating creativity across genre and media.

continuum 9: contraindicators seeks to use speculative fiction and pop culture to challenge assumptions and create surprise endings and new patterns. They delight in hard-edge science, high-flown fantasy, comic books, film noir, high culture and sub-cultures and everything in between.

There will be an AHWA table where you can chat with other members, perhaps man the table and display your wares, or if you aren’t a member already, learn about the benefits of being a member.

The highlight will be a panel discussion with four Australian Shadows Awards finalists where they will discuss their journeys from beginning writers to the heady heights of finalists and winners. All of them are AHWA members and no doubt will be happy to chat with other members about anything writing, and perhaps some other matters too.

If you are interested in manning (or she-manning) on the table, or have any other queries, contact Robert Datson at datsonr@gmail.com.

They involve having the days to create and the nights to investigate how to be scared stiff.

Beechworth’s Mayday Hills Asylum was one of the largest institutions in Victoria. Opened in 1867 (the same year as Aradale), this building also housed thousands of people described as ‘lunatics’, ‘idiots’ and ‘imbeciles’. Closing in 1995 after 128 years of operation, this site is considered one of the most haunted locations in Australia. At its height, Mayday Hills consisted of 67 buildings and was home to over 1200 patients and 500 staff.
As you spend three days and two nights in the facility, you will be able to explore the cold and deserted buildings of what was once a notorious and feared institution in Victoria . Spend the days writing, drawing, filming or photographing the beautiful architecture, and spend the nights scared stiff in the haunted buildings.

Keep an eye on the AHWA website and Facebook page for further details as they are arranged. 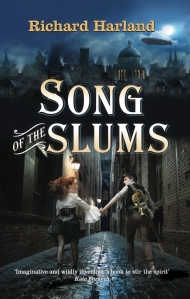 Song of the Slums

Also available from Booktopia, Bookworld and any Australian online retailer. And, of course, on the shelves of all good bookshops.  Ebooks are available from Kindle, Kobo, Google and other ebook suppliers.

What if they’d invented rock ‘n roll way back in the 19th century?

What if took over the world and changed the course of history?

It’s 1846, in the middle of the Age of Steam—but not quite the real historical steam age. As well as locomotives and factories, there are steam-powered airships and strange velocipedes, all drowning in an endless sea of smog. King George IV is on the throne, the wealthy factory-owners are itching to seize power, and vicious bands of ex-soldiers can’t wait to start another world war.

In this period, young women are supposed to be ladylike, and 17-year-old Astor expects a life of quiet luxury after she marries the handsome magnate Lorrain Swale. Instead, she finds herself abandoned in the Swale household and treated with contempt by the whole family.

Help arrives in the form of the charismatic and mysterious Verrol. Together they escape and plunge into the murky slums of Brummingham, where they fall in with Granny’s Gang. Granny Rouse has a vision of a new kind of music taking the world by storm, and enlists them in her band, the Rowdies.

Suddenly it’s all coming true … the irresistible gang-music rhythm is catching on, and fame is at their fingertips! But the Swale family hasn’t finished with them yet. Arriving in London Town for their greatest-ever performance, the Rowdies get caught up in a diabolical plot to overthrow the government.

“Imaginative and wildly inventive, a book to stir the spirit. I loved the music, the syncopated rhythm, the dark, smoky atmosphere, the call to arms, the love story … this is gaslight fantasy at its best.”-  Kate Forsyth 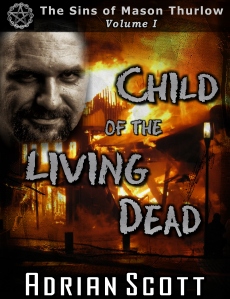 The Sins of Mason Thurlow volume 1: ‘Child of the Living Dead’

The Comte d’Arville is a wealthy plantation owner in Haiti in the late 1790’s during the slave rebellion. His son, Charles, is killed, and the Comte has him brought back to life by a mambo. The child becomes an adult in New Orleans under the guidance of a Satanist, and grows to become Satan’s right-hand man.

Dense jungle reclaimed the Earth four years ago and civilization has been fighting for survival ever since. Without law and order chaos rules the world, and in the struggle between good and bad, good doesn’t always win. Three animalistic tribes have emerged from the initial barbarity: the fiercely territorial lions; the malicious tree dwellers; and the subterranean tunnel dwellers. Having adapted to their strange, new environment, the tribes fight to become the dominant force, fight to be crowned the new kings of the jungle. Still, even with the dawning of this new age, pockets of humanity remain. Vastly outnumbered, they scavenge for food and clothing just to stay alive, clinging to the rumour that salvation lies beyond the jungle. Their only hope is to escape. But hope is in short supply. This is Mother Nature’s domain and she doesn’t give up her subjects easily.

** Paperback to follow in May—published by eMergent Publishing under the original title of Elyora.

It’s October 1974 and all is not well in the town of Elyora. First the clocks stop. And men in shiny suits turn up offering payment for the inconvenience. Then the phone lines stop working. And finally, the power goes out. The trouble is no one comes to explain that. Fast forward to December 2012. Jo, Benny and Hal, members of the band Faunabate, have no idea what they’re in for when their car breaks down on the outskirts of Elyora on the way to their first interstate gig.

Upon arrival it quickly becomes clear Elyora this is no normal town. The magazines are dated 1974. The clocks don’t work. And where are all the people? Some towns you don’t ever want to visit. And Elyora is one of them. Because not everyone gets out alive… Any reviews relative to the publication.

When the death of his father brings Grant Shipman to the tiny Appalachian town of Wallen’s Gap, he believes his biggest problem will be dealing with the slow pace and odd townsfolk. But something sinister is at work. A dark power rises, an echo of the town’s bloody past. A book of blood magic offers an unspeakable horror a gateway into the world of the living, and only Grant stands in the way of their Dark Rite.

“Wood and Baxter have delivered a stunning tale that reminds of an early Stephen King’s talent for the macabre with a pinch of Graham Masterton’s flair for witchcraft and terror. A sinister tale of black magic and horror – not for the faint hearted.” – Greig Beck, bestselling author of Beneath the Dark Ice and Black Mountain

“Wood and Baxter have taken on the classic black magic/cult conspiracy subgenre, chucked in a toxic mix of weirdness, creepshow chills and action, and created a tale that reads like a latter-day Hammer Horror thriller. Nice, dark fun.” – Robert Hood, author of Immaterial and Fragments of a Broken Land: Valarl Undead

In Transit
by M.R. Cosby
Published in Darker Times Vol 1