I had a really awesome dream the other night – the kind that most “normal” people would consider a nightmare.  That’s all.  I wasn’t really going anywhere with that story because I can’t remember the dream, just that I had one.  I like to share.

Follow this and start receiving monthly updates of publications.

We are a small press based in Australia.

Our concept is to publish within a new paradigm, in that we plan to release anthologies that are mostly filled by solicited authors, yet we will still open a few spots for general submissions.

Cohesion will be also be publishing novels and novellas by solicited authors, yet we will, at certain specified times, open to general submissions.

Our first offering will be SNAFU: An Anthology of Military Sci-Fi/Horror.

For more information on upcoming submission themes and periods, check out our submissions pages.

Cohesion Press will be publishing world-wide, in both print and e-book formats, and also plan to venture into the limited edition hardback format.

We will not do your work any injustice.

We are here to stay.

If you are interested in taking part in either of these two groups, you need to join the AHWA today, and check out all the other exciting opportunities, you as an author, are currently missing out on.  There are tips on writing, how to get published, competitions, group forums and so much more.

Check out the Australian Horror Writer’s Association web-site today and become a member.

The Australian Shadows are the annual literary awards presented by the AHWA and judged on the overall effect – the skill, delivery, and lasting resonance – of horror fiction written or edited by an Australian.

Winners of the Awards receive a hand crafted trophy from the masters of the horror special effects industry, Nightshade FX.

The awards are open to submission of any horror fiction published (or anthologies edited) by an Australian/New Zealand/Oceania resident or citizen in the 2013 calendar year—submissions until February 28th 2014.

Shortlists for each category will be determined by a panel of judges . The shortlisted finalists are announced in March/April every year.

Read the Award Entry Guidelines to find out how to enter works for consideration.

They involve having the days to create and the nights to investigate how to be scared stiff.

Beechworth’s Mayday Hills Asylum was one of the largest institutions in Victoria. Opened in 1867 (the same year as Aradale), this building also housed thousands of people described as ‘lunatics’, ‘idiots’ and ‘imbeciles’. Closing in 1995 after 128 years of operation, this site is considered one of the most haunted locations in Australia. At its height, Mayday Hills consisted of 67 buildings and was home to over 1200 patients and 500 staff.

As you spend three days and two nights in the facility, you will be able to explore the cold and deserted buildings of what was once a notorious and feared institution in Victoria . Spend the days writing, drawing, filming or photographing the beautiful architecture, and spend the nights scared stiff in the haunted buildings.

Keep an eye on the AHWA website and Facebook page for further details as they are arranged. 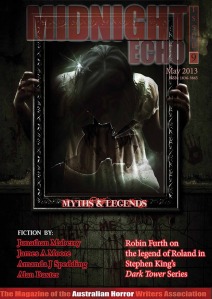 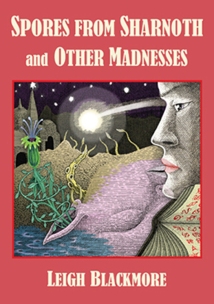 Spores from Sharnoth and Other Madnesses

Spores from Sharnoth is a spellbinding poetic expedition and trance undertaken by the author, Leigh Blackmore into visions like The Doors’ the end. It is a cloud of churning darkness with eyes flying

over a plain of Leng. Blackmore has written poetry of great audacity and verve. The darkness of Ubbo Sathla seethes between the lines of your holding, trembling fingers and spills over the pages like ooze. Now Sharnoth is reprinted for the third dastardly time and may require … exorcism. Any reviews relative to the publication. 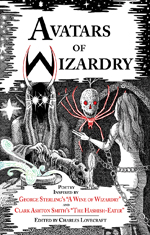 Avatars of Wizardry: Poetry Inspired by George Sterling’s “A Wine of Wizardry” and Clark Ashton Smith’s “The Hashish-Eater.”

Avatars of Wizardry is ten jewelled poems of classic strangeness and madness. The authors in these exotic works take on various challenges. They plunge through existence on perilous journeys of incandescent wonder and cryptic terror. The poetry is unparalleled, meticulous, and quintessential, driving between flamed pillars of hell, or glowing nymphaeas in the other place. One poet goes back to the dawn and slime of time. Another sees the destruction of the whole later universe (and, actually, three do that). The goddess of Fancy visits Satan. And unearthly Music strums on a lyre of lyrical voids. You are not spared gorgeousness, or vivid exhilarations of light and dark.

Lament Of the Unknown Soldier

Published in This Is How You Die

On the Darkness of Cats